Solar array will be among the largest in the state

BRATTLEBORO — The Windham Solid Waste Management District has finalized its deal with a solar power developer that will pave the way for the developer to build what will eventually be one of the largest solar arrays in the state of Vermont.

WSWMD and Pristine Sun, LLC finalized a 25-year agreement that will have the solar development firm leasing land over a capped landfill from the waste district and financing the 5-megawatt solar project.

Integrated Solar of Brattleboro will build the solar array and the governments and school districts within the 19 southern Vermont towns that make up WSWMD will have the first rights to purchase the solar energy through Green Mountain Power.

Pristine Sun will pay for the development and own the solar array when it is done, which WSWMD Executive Director Bob Spencer said could be as soon as October 2016.

“We’re glad to have this phase of the process successfully completed,” Spencer said. “We’re looking forward to the next phase of signing up member towns and school districts for significantly lower cost renewable electricity.”

Pristine Sun will also pay WSWMD about $102,000 annually to lease the land, which will further reduce the annual assessments of the member towns.

“Pristine Sun is excited to finish contracting this project, and begin the next steps in project development,” said Cary Hayes, vice president of sales at Pristine Sun. “We are extremely grateful that the Windham Solid Waste Management District has chosen Pristine Sun to help create Vermont’s largest solar energy project. We’re excited for the chance to partner with the Brattleboro community, WSWMD, Integrated Solar and Green Mountain Power to turn this landfill into clean, renewable, affordable energy for Vermont.”

Details on how the municipalities will sign on are still being worked out, Spencer said.

Initial estimates find that towns will be able to reduce their energy costs by up to 33 percent, Spencer said.

Spencer said he will be visiting with selectboards from the member towns in the fall when more details are available.

The project was made possible by the passage of H.702, which was signed into law by Gov. Peter Shumlin on April 1, 2014 and includes a provision allowing for up to a 5-megawatt solar facility on Windham Solid Waste property.

“I’m glad to see this program moving forward,” Shumlin said. “The goal of this legislation was to help provide clean, renewable energy for more Vermont communities while growing renewable energy jobs and saving ratepayers money on transmission costs. This is an important effort and it’s great to see it progressing.”

“We are pleased that this development agreement has been reached,” WSWMD Chairman Lou Bruso said. “An otherwise valueless parcel of land is going to be used for something that will be very good for the district and our member towns.”

The project will have to get a storm water management permit and a certificate of public good from the Public Service Board.

“This project is community solar at its best,” Integrated Solar president Andy Cay said. “A dormant community asset is being put in service for a productive use that will help to pay the bills for the district and will offer significant savings to member communities. Integrated Solar is excited to have been selected with our valued partner, Pristine Sun, to work with the District and the 19 member communities to create the largest Vermont solar development to date.” 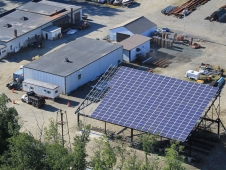 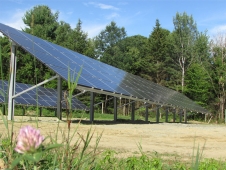 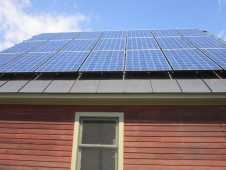 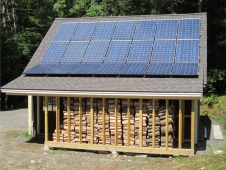